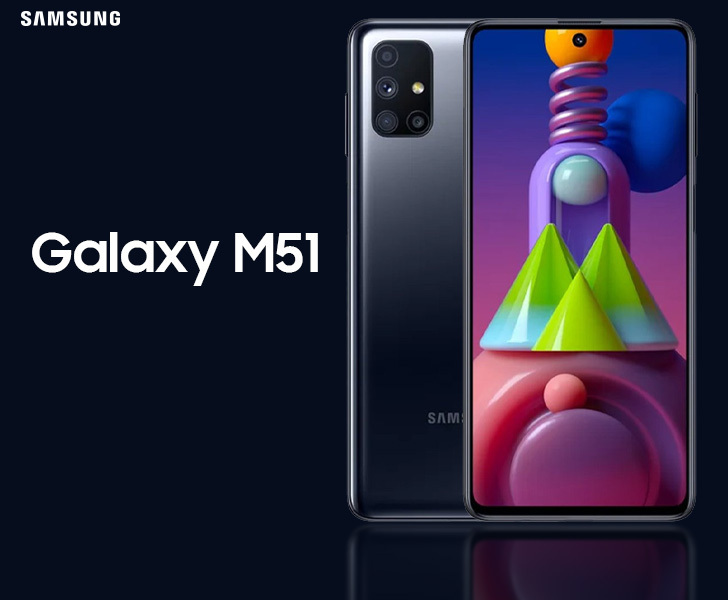 The Samsung Galaxy M51 has been a subject of a number of leaks for the last month or so and with the teaser from last week from Samsung, we were expecting the handset to make an appearance in India first. But to our surprise, the phone went official on Samsung’s official German website.

The rumors were right all along so the specs aren’t necessarily a surprise. The centerpiece feature of the phone is the humongous 7,000 mAh battery promising more than two days on a single charge with support for 25W fast charging. The chipset behind the wheel is the Snapdragon 730, although Galaxy M51’s landing page mentions only an octa-core processor paired with 6GB of RAM and 128GB of storage expandable via microSD card.

Samsung Galaxy M51 has been launched in Germany and is a currency available for pre-orders on the company website. Samsung Galaxy M51 features a quad rear camera setup, a hole-punch display, and a side-mounted fingerprint sensor. The USP of the smartphone is its massive 7,000mAh battery that comes with 25W fast charging support. The company has already started teasing its India debut on Amazon, and the rumour mill suggests that the phone could be launched in India in the second week of September. The phone is said to be priced under Rs. 30,000 in the country.

The display is 6.7″ Super AMOLED with FHD+ resolution but with a side-mounted fingerprint reader. The quad-camera array on the back houses a 64MP main camera, 12MP ultrawide one with a 123-degree field of view, and a 5MP macro shooter. The other 5MP camera is just for depth sensing while the front one is 32MP.

The phone features a 32MP selfie camera. Samsung captured a 35 percent share in the European smartphone market in Q2 of this year. Which is ahead of Apple’s 17 percent and Huawei’s 16 percent, according to a Counterpoint Research report.

For photography, the phone features a quad rear camera setup with a 64-megapixel primary sensor, coupled with an f/1.8 lens. There is a 12-megapixel sensor coupled with an ultra-wide-angle lens that offers a 123-degree field-of-view, a 5-megapixel depth sensor, and a 5-megapixel macro camera. On the front, there is a 32-megapixel snapper for selfies. The phone houses a massive 7,000mAh battery with 25W quick-charging support.