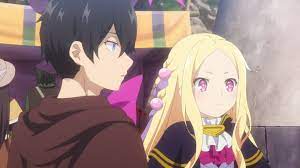 In episode 5 of The Dawn Of The Witch, it will finally be revealed what is the mystery behind the village and why those villagers don’t come out of their houses. In the previous episode, when the fight with Arbiter was going on, Saybil decided to use Staff of Ludens, and it seems as if it has some kind of connection with him. When he fights with the witches, he can us that.

But before he does that, he has a major task. He has to find Hort. However, in episode 5 we will see him getting trapped inside the chamber with Professor Los and a mysterious lady. So first, he will have to find a way to get out of that place. Meanwhile, Kudo would get angry when he finds out about Hort. That will end up in a massive battle.

Preview of what will happen in Episode 5 of The Dawn Of The Witch:

Kudo comes across a bear monster who claims to have killed and eaten Hort. Kudo gets very angry when he learns about this. Viewers can see his anger burning in flames as he started changing his scale’s color. But the monster did not seem surprised by this and appreciated it. He purposefully wanted to see how far Kudo can go to fight for his friend. No doubt, Kudo starts using his magical powers and casts some spells which would eventually kill the monster. This is because he had a strong bond with Hort.

In the meantime, Professor Los and Saybil would still be in the cave searching for Hort. However, they had no idea the father was behind all these. Although what has happened to Hort remains unclear. Apart from this, in the previous episode, we witnessed that the father had pushed Saybil and Professor Los into a chamber, where he locked them up. So we can expect that they will find the mysterious witch, who will help Saybil to remember his past and also guide them to find Hort and learn about the Mage and Church army.

A Quick Recap of the previous episode:

In the previous episode, Syabil, Kudo, and Hart saved a villager kid from a monster. They were assigned a field project in their village by their headmaster. After that, they came across a father who narrated a story about witches and how they used to rule the village. While he continued to narrate the story, Professor Los appeared out of nowhere. At first, she appeared suspicious of the father but decided to let it go.

Later the father showed them a house where they could stay. After they were left alone, Professor Los decided to go against the words of the headmaster and kill that witch. Saybil also supported this idea as he believed they were already on the verge of getting expelled. He also spoke about using the Staff of Ludens against the witch.

The Dawn Of Witch Episode 5 is already out on May 8, 2022, at 2 am JST. It got aired on Crunchyroll and is also available on Muse Asia’s YouTube Channel.