Jujutsu Kaisen is one of the most loved manga which is currently in progress. Its popularity has reached fourfold since its release. It is written by Gege Akutami. Chapter 185 of Jujutsu kaisen is titled Bye-bye.

Panda being the youngest of three siblings, has always had his brother and sister who would look after him. That is the reason Gorilla never appreciated Panda’s weakness but their sister tries to change his perspective. However, it seems that maybe it’s finally time for the siblings to say goodbye owing to the damage Panda had sustained at the hands of Hajime Kashimo. 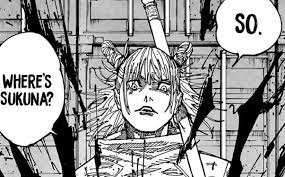 What is the storyline of Jujutsu Kaisen?

Gorilla beats up a young Panda, who considers that Panda’s defense is full of holes. Panda goes to his sister for help. Then an angry Triceratops marches over and demands that Gorilla must cease his bullying. Triceratops teaches Panda that at times even he needs to fight back. When Panda goes up to beat up Gorilla, Gorilla punches him in the face which makes him cry even more. Gorilla runs off with Triceratops in hot pursuit.

Later, Panda is seen holding a Santa Claus ball by a river with Gorilla, a tanuki, and a fox. As the panda doesn’t know how to ride without training wheels, so they would be unwilling to take him with them. Therefore the fox whispers something into the ears of tanuki and he puts a condition on Panda. He tells Panda that he can join under the condition that he can throw his ball into the river. But as this was a gift from Santa, Panda hesitated at first. But after the fox and tanuki pressured him and Gorilla’s grumpy stare, Panda tosses the ball into the river. But as soon as the tanuki and fox realize that doing so was a crime as it can harm the environment, they ran off.

At night before bedtime, Triceratops berates Gorilla for bullying Panda. She tells him that, he should rather look out for him as his brother and not bully him. As Gorilla feels bad that the panda lost his ball, before going to sleep, he opens their piggy bank to check if he has enough change to buy a replacement ball for Panda. But as he goes to sleep, he thinks that an idiot like Panda would be fine with just any ball. Then he suddenly wakes up to see their father carrying them. He asks their father where they are going to this their father answers that there’s no reason and that it’s permanent. At that moment, Panda burst out of the house, desperately searching for them. Gorilla tells him to stop with their father because he feels that as Panda is terrible at everything, he cannot survive without them. That’s when the father tells him that they’re being left behind and not Panda. A confused Gorilla gets defense, wondering if it was about the ball, but begins to cry as he suddenly realizes what is going on.