What is happening in Chapter 359 of My Hero Academia!! 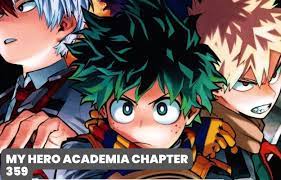 Place of Learning is the three hundred and fifty-ninth chapter of Kohei Horikoshi’s My Hero Academia.

Summary of Chapter 359 of My Hero Academia:

Teachers and students inside the U.A. Flying Fortress keep up the pace on the building’s renovations. One of the Development Course students goes to catch some Business Course students making a documentary about the events and chastises them for doing so at this time. Instead, they say that all previous conflicts had been captured on video and chronicled, and it is their responsibility to champion Heroes and serve as a conduit for the rest of society. This is also the result of their three years of study and will demonstrate how they all came to victory today.

Dynamight reaches out in front of Tomura and uses his Cluster technique to deliver a fully direct strike, sending a massive Explosion reverberating throughout the Fortress. The Construction crew, where Creati realizes it’s Dynamight, the Electrical team, Eraser Head, and Phantom Thief, who attempt to keep their eyes open, all feel the impacts. Chargebolt responds that it’s okay since, unlike how it may appear, he doesn’t fight randomly when Yuyu questions why he’s going too far.

Unfortunately, Tomura managed to get hold of Dynamight’s right arm and warn him that it had to be removed because of the way he concentrates his blasts to reduce collateral damage while increasing the raw force.

He continues to say that he has lost interest in him and that he has no further interest in him. Mirko, Best Jeanist, and Edge shot try to stop him from sending out another wave of fingers. Dynamight is knocked to the side by Tomura, who then dispatches the three with his “All Might-level” power after making fun of them and questioning who thought it was a good idea to try to get near.

Dynamight struggles to recover as he recoils at how much strength separates them. Tomura observes him and comments that neither his ideas nor sentiments caught his attention; rather, the fact that he is the closest to Izuku of all people is what interests him.

How does Chapter 359 of My Hero Academia conclude? 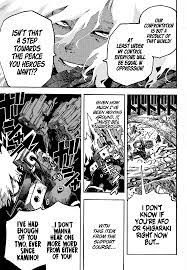 Izuku’s condition is requested by Eraser Head from Mandalay, but she is unable to contact him because the electromagnetic waves are interfering with their communications. Eraser Head appeals to anybody who can help to free Dynamight from Tomura, who is prepared to kill him. Dynamight still needs to complete his studies at U.A. to become the Number 1 Hero.

Suneater is in the wreckage talking to Nejire Chan about needing a real graduation ceremony when suddenly a voice says they’ll get Nezu to throw one after this is finished. Suneater wonders if they have a chance as the person that is emerging from the ground promises to safeguard everyone until Izuku arrives. Lemillion returns as The Big 3 prepare to show off their triple-threat power.