The movie version of ‘Wizard Of Oz’ by the name ‘Wicked’ is set to release in 2024 with Cynthia Erivo and Ariana Grande as their leads. Cynthia is an English actress, and singer-songwriter who has won multiple awards like a Grammy, a Daytime Emmy, and a Tony for her magnificent work and performances. She has started in Harriet (2019), Pinocchio (2022), Bad Time at El Royale (2018), and many more. Ariana Grande-Butera is an American singer and actress, she initially started as a child actress on Nickelodeon, and then moved into her music career, her four-octave vocal range has received a lot of praise and acclaim, she recently got married to Dalton Gomez who is a real estate agent, within LA. 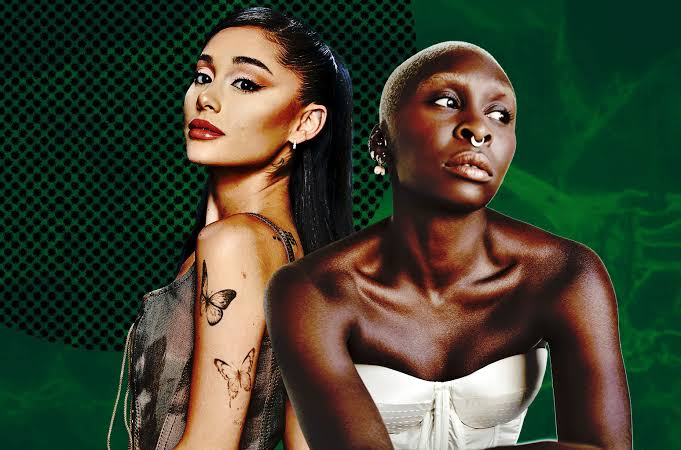 Both the stellar singers are cast in the movie of Wizard of Oz called ‘Wicked’. Grande has mentioned a couple of times in various interviews about her love for all things Wizard of Oz and how she wishes she was cast in a musical of any sorts decided to be made. Short say her dream did come true when she took to social media to announce her casting in the role of Glinda, and Erivo who plays Elphaba.
A picture went viral of the two huggings and bonding behind the sets of the highly anticipated movie, Cynthia took to Instagram to comment on Grande’s picture of them laughing at what seems to be the read-through of the movie, where she said “I love you Xx” Erivo and Grande were cast in November of 2021, and have mentioned in interviews when asked that they were excited to work with each other and cannot wait to start shooting! Erivo posted a picture on Instagram of their first meet on set, where they are seen hugging one another. The fans are delighted to see that friendship has been blooming behind the scenes which will result in great chemistry on screen between both Grammy winners. Cynthia says that she knows what she and Ariana share is nothing less than sisterhood and that they have been meeting outside the sets and besides the movie, they seem to get along very well and they can sit down and chat for hours about everything and nothing.

The fans of the movie, Erivo, and Grande wish nothing but success for the highly awaited movie, which is set to release on 25th December 2024. Many of the actress’s friends and family took to social media initially for congratulating them on getting the roles of such iconic characters that have stemmed from Broadway by household names like Idina Menzel and Katie Rose Clarke! Fans have been eating up all the content that is being posted by the official accounts of the leads, or by any of the fan accounts that are available on Twitter and Instagram alike.

Share
Facebook
Twitter
Pinterest
WhatsApp
Previous articleMy Isekai Life: I Gained A Second Class And Became The Strongest Sage In The World! Episode 8: We Got Some Monster Armor
Next articleWhat is the release date of The Quintessential Quintuplets? check out now