The highly-anticipate Marvel Avenger game from Crystal Dynamics and Square Enix is just a week and change away. After being delayed from its initial May 15 release date, it’s now set to arrive on September 4 for PS4, Xbox One, and PC. You can pre-order Marvel’s Avengers now to receive a three-day head start on playing the full game if you pre-order the special editions. Depending on which major retailer you get it from, you can also receive a different, additional bonus.

Read To Know The Specifications

This upcoming Avengers game will give fans the chance to play as their favorite heroes and revisit other familiar characters and settings from the Marvel universe. You’ll take on missions as some of the most popular Marvel superheroes: Thor, Black Widow, Iron Man, Hulk, and Captain America. The star of the game, however, is Kamala Khan, who brings the Avengers back together after a disastrous event at the start of the game. Kamala is an Inhuman who discovers she has developed shapeshifting abilities that let her grow in size and strength, adding a unique power to the group of heroes. Depending on which hero you play as Marvel’s Avengers has a wide range of gameplay options available. Spiderman will also be playable, though only on the PS4 and PS5 versions of the game, Square Enix announced

In addition to its solo campaign, Marvel’s Avengers will include online co-op for up to four players. There will also be various character customization options.

In a recent Livestream, Crystal Dynamics revealed hawkeye will be the first DLC character joining the game’s roster after launch, bringing his own story mission that can be played either solo or cooperatively. This is part of the greater “Avengers Initiative,” a series of post-launch content that expands the Marvel universe. Over time, players will have access to new heroes, Challenge room, Warzone mission, and more. 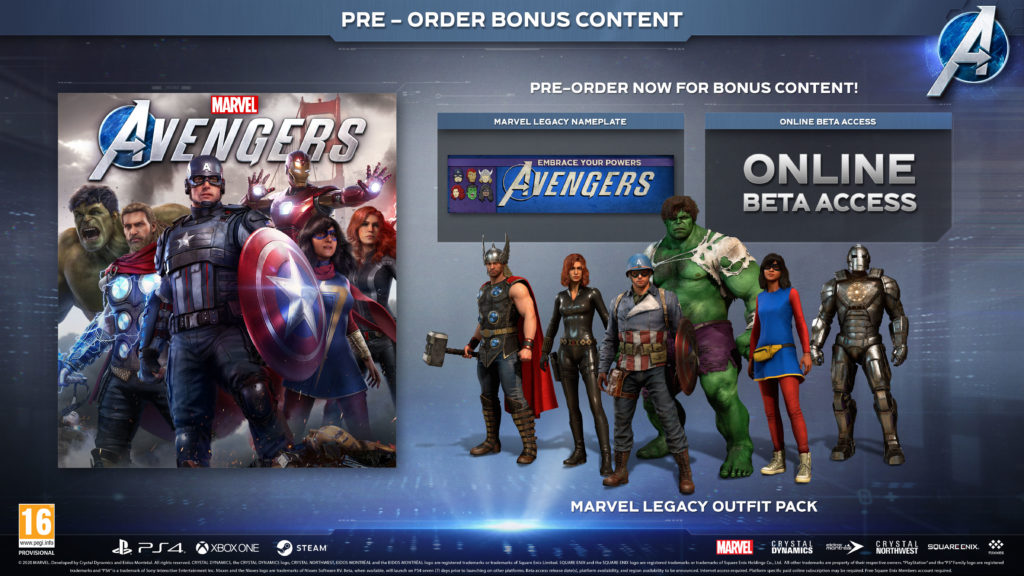 Pre-ordering Marvel’s Avengers on PS4 or Xbox. One will also get you a free upgrade to the PS5 or Xbox series X version if you buy one of the upcoming next-gen consoles. Your save data and player profile will carry over, and the game will allow cross-gen play. Anyone who pre-orders Marvel’s Avengers gained early access to the game beta. Those who pre-ordered on PS4 got exclusive first access starting August 7, followed by PC and Xbox One players on August 14. All of the betas have ended ahead of the game’s impending release, however.