“Shahid Kapoor has an epic reply after Ishaan Khatter asks him about looking ageless in his clean shaven look “Click To Find Out More! 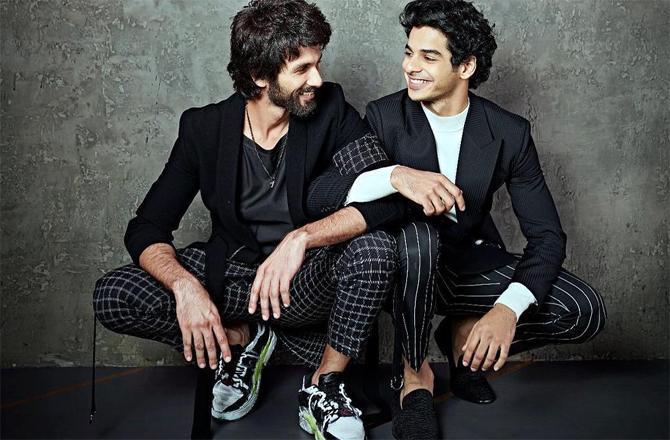 Shahid Kapoor is currently holidaying at their holiday home in Punjab with wife Mira Rajput and kids. Shahid was sporting a bearded look throughout the lockdown, but finally, the actor has bid adieu to his beard as he is seen sporting a clean-shaven look. Thanks to social media, Shahid Kapoor has been treating his fans to a series of selfies. One such selfie caught the attention of young brother Ishaan Khatter.

Ishaan left a comment praising his big brother for looking suave at the age of 39. He wrote, “So that’s what it feels like to be ageless Thu Thu,”

To this, Shahid replied, ‘Did you just spit on me.”Well, we totally love these brothers and their camaraderie and we would want to do ‘Thu Thu’ to their relationship. Ishaan is known to be very close to his half-brother Shahid. Ishaan takes career advice from his older brother whenever he needs it. As for Shahid, he was last seen in Sandeep Banta’s Kabir Singh. Next, he will be seen as a cricketer in sports drama Jersey.

Jersey is a remake of the Telugu movie of the same name starring Nani. Gowtam Tinnanuri is helming the project, who also directed the original blockbuster down South.

Shahid was shooting and practicing for the role in Jersey before the lockdown came into effect in March. He also bruised his lip while on the sets of Jersey. As the team looks forward to resuming shooting soon, Gowtam, in an interview, has shed light on how the filming on the sports-drama will be scheduled once it is safe to be on the sets with Shahid, Mrunal Thakur, and other actors.

Talking about shooting Jersey amid coronavirus scare, Gowtam said, “Now, there is a cap on the number of crew members who can be present on a film set. Adding to it, Gowtam also praised Shahid’s cricketing skills.

Shahid Kapoor will start shooting for Jersey by the end of September.

The shooting will start in Chandigarh and the makers are currently working out the logistics. Speaking about the shoot,  “About 15 days’ work is pending.