Tayshia Adams: An Insight Into The Bacharellotte actress’s Love life and dating history. 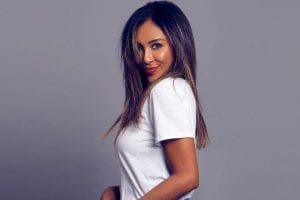 Tayshia Adams put her heart on the line in relationships both on and off-camera over the years, but she’s taking another chance at love on The Bacharellotte.

Adams was first introduced to Bachelor Nation when she competed for the affection of Colton Underwood on season 23 of The Bachelor in 2019. However, she joined the series in the wake of her divorce from her ex-husband, Joshua Bourelle.

“This past year and a half has been kind of hard for me and it’s actually because I was married, and I got divorced,” she said on the show. “I actually married my first boyfriend and I was with him for about six years or so.”

Tayshia briefly dated Derek during Paradise while she was in a ~love triangle~ with him and JPJ. And by “love triangle,” I mean Derek and John fought over her in the messiest and most deranged way ever. Memories!

Tayshia dated Colton during his season of The Bachelor, and she made it all the way to his final three. And they had some cute moments! Like this beachy cuddle!

And the time they hurled their bodies out of a moving plane, an experience Tayshia probably summed up best with “HOLY FUUUUUUCK!”

But it obviously didn’t work out between these two thanks to Colton being in love with Cassie Randolph. He wrote a little about in his book kinda rudely saying he “would’ve cut Tayshia” but “wanted to separate Cassie and Caelynn” because he “knew their friendship had grown and thought it might be interfering with my relationship with Cass. If Caelynn went home, it might let Cassie see that I was more serious about her.”

Tayshia has since called Colton a bad kisser, which he felt the need to bring up while congratulating her on The Bachelorette:

This is the guy Tayshia was dating for 10 months right before going on Colton’s season, and unfortunately, he tried to make her ending their relationship into a whole THING. By which I mean he spoke to Us Weekly, saying they fell in love “quickly” and were exclusive.

Meet Tayshia’s ex-husband! She opened up about their relationship on The Bachelor, telling Colton, “I was married and I got a divorce. I actually married my first boyfriend and I was with him for about six years or so.”

Tayshia also revealed that her husband cheated during The Viall Files, saying, “My ex was unfaithful as well. But it’s just that…yeah, he was moving on, and I just was kind of forced to in away.”