A woman was left sick after she spotted some creepy and ghostly appearance in the back of her photo. There are still some events that are beyond the scope of science. The photo was clicked during the lockdown. She was going through her gallery where she spotted an unwelcomed guest looming from behind.

Alice Martin had been scrolling back through family photos taken during lockdown when she spotted a strange guest. The photo shows Alice smiling with her partner Tom Brown and son Louie Brown - with what appears to be the shadow of a girl standing by the door behind them.

The mum-of-one claims she can see a little girl with long hair, defined facial shape, and an object held in her hands as she peers from her son's bedroom. The 23-year-old immediately sent the photo to her sister and turned up the brightness on the photo - and jumped when what appeared to be an eye came into focus in the photo.

Alice, who admits she is usually skeptical about the paranormal, claims she cannot explain the shape as there was no furniture nor items hanging on the door at the time. Eerily, little Louie always slept in his parent's bed as he could 'never settle' in the room where the figure appears - but Alice is relieved to have moved to a new house at the end of May.

The Family Has Now Shifted To A New Place 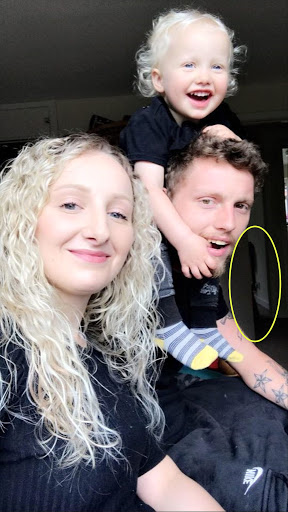 "I was saying to my partner that when I saw it I got sick. It's not a nice thing. People are saying it looks like it's good and it's not there to harm me, but it puts me on edge a bit. The family has since moved to a new house and Alice was delighted when Louie was happy to sleep in his own room for the first time.

Alice said: "The day the picture happened, we were in lockdown. Around that time we got told about our new house so we were really happy [to be leaving].

"Little stuff happened. I remember when I was pregnant I didn't really sleep very well. I was laid in bed and my partner had gone to sleep but I was awake, and I saw the telly turn on.

"Since we had been living there, my son would not settle in his room at all. His room is the room where the figure is [in that photo]. He slept with us for two years.

"Ever since we have been in our new house he has settled perfectly in his new room with no issues at all. There must be something. It is that room."