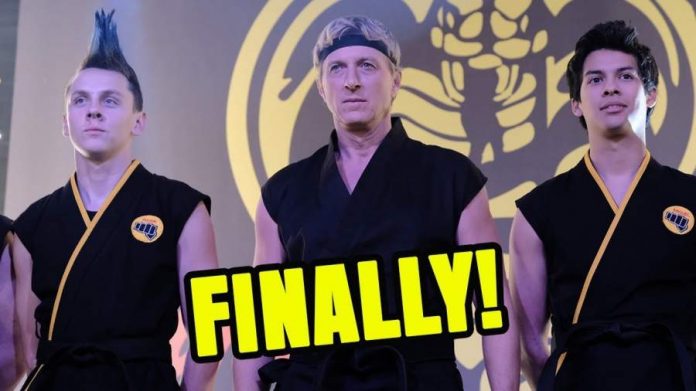 Are you a die-hard fan of karate based films? Have you watched KARATE KID countless times and is still ain’t over it?
Then we have a good piece of news for you all.

The famous YouTube Series, a record-breaker of its time, is all set to debut on the world’s largest streaming platform Netflix. Cobra Kai which was released on YouTube in 2018. The streaming platform is bringing the first two seasons of popular former YouTube series on its platform.

Cobra Kai is written and executive produced by Josh Heald, Jon Hurwitz, and Hayden Schlossberg through their production house counterbalance entertainment. The series debuted on YouTube on May 18 and became the most successful show ever release on the platform and went on breaking all the records. The first season was also regarded as the Best drama of 2018 by Rotten tomatoes, earning a rear 100% fresh ratings for its seasons first. The show also enjoyed an IMDb rating of 8.8 out of 10. The series also gained worldwide recognition and awards, including Emmy nominations.

Streaming of season 1 and season 2 is considered a strategy ahead of the season 3 release on Netflix. The first twenty-eight episodes of karate kid continuation are set to hit the streaming platform from 28 August. According to sources, YouTube has decided not to continue with season 3, and Netflix has gained the official rights for the same. YouTube finally decided to ditch original scripted fare on its platform favoring unscripted programming, which prompted the shift to the streaming platform.

It was officially announced on the “See what’s next” official Twitter handle of Netflix that season 1 and 2 are coming to Netflix on 28 August.

Before season 3 hits the digital platform, we give you a basic plot of the two seasons.

Cobra Kai is set on the original karate kid film, which was released decades back. The series stars William Zabka as Johnny Lawrence, a former bully. As Johnny is now in his middle age and has nothing much to show, he decides to reopen Cobra Kai to get his life back on track. He admits some misfit youths in his batch to train them. Ralph Maccio makes a comeback as Johnny’s arch-rival Daniel La Russo who is now a rich and prosperous businessman and apparently deals in cars. The returning of Ralph will give rise to the old feud between him and Johnny.

According to sources, the shooting process of season 3  was completed in November 2019. It is assumed that the series is currently in its production work and will hit the digital screen by the end of 2020 or in the early months of 2021. The audience can enjoy watching it on Netflix.

There has been no official trailer released yet. Makers have only announced the renewal news and have been tightly lipped since then. However, you can find the previous trailer here.

Nothing much to reveal about the plot. However, it will be interesting to see how Johnny will manage his Cobra Kai after the events of the 1984 All Valley Karate Tournament as he is finally back after 34 years. Will the old feud between the two, will continue?

That a wrap for now! Stay in touch, and we will bring you the latest of all here. Till the time, stay home, and stay safe.

Share
Facebook
Twitter
Pinterest
WhatsApp
Previous article
Ozark Season 4 to be the last for Netflix’s originals! Will Jason Bateman be back? All the spoilers are here!
Next article
“Aquaman 2” fans are demanding a replacement for Amber Heard! Johnny and Amber controversy and MORE!