Johnny Knoxville, Steve-O, Bam Margera, and their friends have reunited for yet another cringe-worthy film where they inflict harm upon themselves in the name of laughter. Even though Johnny's stunts were once the most controversial thing around these guys, it will be what has been happening behind closed doors that might turn some heads this time - as Bam continues to rant about his former co-stars while Steve-o reveals a new stunt he pulled off with help from a medically certified person who is also paralyzed below waist level.

Steve-O, the actor, and comedian who starred in Jackass 4 announced that it will be released on October 17th. The new movie promises to be just as crazy (if not crazier) than all of their previous films! 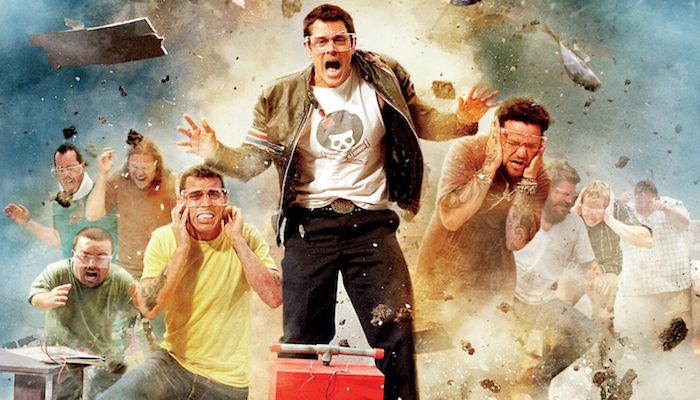 In the recently released trailer for Jackass 4, Steve-O says that fans can expect to see a movie set in Hollywood with all of their favorite stars.

“I might have actually talked a doctor into dressing up as a clown so that he could put a four-inch needle into my spine and inject me with a drug that would paralyze me from the waist down while I was sprinting and before all kinds of terrible sh*t happened to me,” said Steve-O. Just when you think it couldn't get any more strange, he added, “I’m getting ready to do a world record highest belly flop ever performed into pure piss."

"That’s why I have 190 gallons of piss in my front yard at home.” Steve-O even showed the large bottles of urine stocked in his yard and said that there were several people who contributed to the collection. By the look of it, a few of his contributors need more water in their diets. Check out the clip below and let us know if there's any amount of money that would make you jump into a pool of someone else's urine.