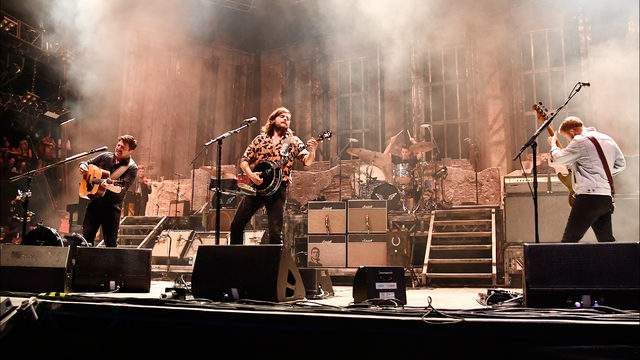 Winston Marshall, a founding member of folk-rock group Mumford & Sons announced Thursday that he is leaving the band so that he can “speak freely” about political issues.
Mumford & Sons took an unexpected break earlier this year when Winston tweeted his admiration for “Unmasked,” a book by right-wing writer and activist Andy Ngo which attacked far-left militant groups collectively known as Antifa.

Marshall, a guitarist from the UK band that was accused of endorsing the far-right ideology last week, said Thursday “nothing could be further from the truth.” He went on to condemn all political extremism and say his decision to leave was so he can speak freely without consequence for his friends who still play with him in The Libertines.

Marshall said that “as long as I am a member of the band, speaking my mind on the evils of political extremism could bring them trouble. My loyalty and love for them cannot permit that.”

Winston Marshall, banjoist and lead guitarist of Mumford & Sons announced he is leaving the band. His departure was a “difficult decision first brought about by an unintentional Twitter storm”. 33-year old Winston caused controversy earlier this year after tweeting about US journalist Andy Ngo’s book titled Unmasked: Inside Antifa’s Radical Plan To Destroy Democracy on social media which led to his deletion later. In one tweet from June 19th, 2019, in response to reading what has been described as “important” work that had “confirmed for him all [his] suspicions,” he praised author Andy who according to The Guardian risked life threats while investigating left-wing radical Antifa groups said they would stop at nothing.
When asked about his departure from Mumford & Sons, the musician said that being a part of the band was “exhilarating.”

In a statement, he said: “From odysseys through the Scottish Islands to headlining Glastonbury, from The Betsy Trotwood to Madison Square Garden. We’ve done it all. What a blessing it was to be so close to such talent as those three lads. I will look back at it all with immense pride and love. However, after much reflection and consideration, I have decided it is time to move on.

“This is a difficult decision first brought about by an unintentional Twitter storm.”

The London band that formed in 2007, Mumford & Sons have had huge success with their jangly folk-rock and won the album of the year Grammy for their 2012 record “Babel.”

Share
Facebook
Twitter
Pinterest
WhatsApp
Previous articleVideo: Kylie Jenner Show off Her Hot Black Bra, Shown her Toned Body
Next articleOfficer in Critical Condition About to Die After Being Shot in the head, Manhunt on for Suspect, REVEALED the Real Reason