Only Murders in the Building Episode 5 [Release date Confirmed?] – The latest episode is gonna be out , read the Speculations, Cast, Where to watch, etc

Deepanjan Mitra
An Anime and Manga fan, a sports enthusiast and a Metalhead

Only Murders in the Building Episode 5 -The latest episode “The Twist”, extended review

What is the story based on and how did it come to be?

Has the trailer been released, where could you watch it?

For the ease of the viewer, the official trailer is available down below , or you can go watch it on the official YouTube account

Summary of events till the latest episode(*spoilers*)

In this brand new Hulu web series, we follow a trio of strangers who live in the same apartment building, The Arconia which is both the base of operations as well as the scene of the speculated crime. The story starts as Oliver Putnam,(Martin Short) a failed Broadway director with a failed marriage, Charles Haden-Savage (Steven Martin) a washed-up actor of yesteryears, and Mabel Mora (Selena Gomez) coincidentally meet in the same elevator and see the victim of the story Tim Kono speaking on phone.

Sometime later the three can be seen getting evacuated from their building, but due to their own curiosity and their love for mystery decide to sneak into The Arconia to see what happened.

Here they come to know that Kono has committed suicide but due to his tense and weird mannerisms the day before, the three suspect that this suicide is rather a murder. Thus the trio who share a common love for true crime podcasts decide that they’ll investigate the reasons behind Kono’s death and after solving it will record it to make their own True Crime Podcast aptly named, Yes you guessed it right Only Murders in the Building. 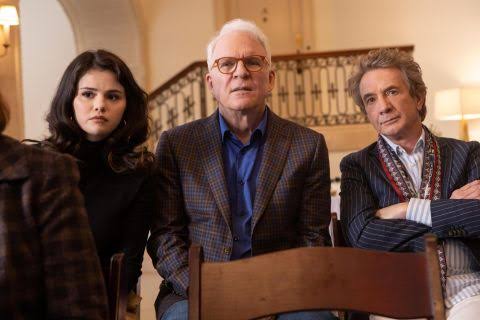 Before going further into the story let’s go a little more in-depth regarding the main players of the game, now shall we!

The 3 main players of this game are:

Mabel Mora is played by American Singer, Actor, and Entrepreneur Selena Gomez. Mabel is staying at an unfinished apartment which according to her she is renovating for her aunt. It is later revealed she knew Tim Kono previously evident by a nearly decade-old photo of Kono and Mora in his home and something that happened in the past which led to them drifting apart. It has also been seen that Mora

Then there’s the man who spawned the idea of the podcast, Oliver Putnam, a failed Broadway director who is now estranged from his wife and also on not-so-good terms with his son.

The last one of our trio of protags is senior Charles, who used to be a television actor back in the 1980s but since has washed into obscurity and nowadays living a lonely life.

Other recurring Characters include the victim Tim Kono(played by Julian Cihi) who as later revealed used to work as a stockbroker for none other than Sting, ya you heard that right the Rockstar Sting (more on it later). Other characters include Nathan Lane as Teddy Dimas, an old friend of Oliver who formerly produced many of Oliver’s shows. He agrees to sponsor the podcast out of pity & Vanessa Aspillaga as Ursula, the Arconia building manager.

What can we expect in the latest episode?

In the last episode, we had seen Mabel acting strange which in turn was related to getting and Tim’s past, where they used to be fans of The Hardy Boys. Oliver and Charles suspect there’s more to Mabel than what meets the eye and thus try to investigate her incognito. As the latest episode is named “the twist” we can effectively say that “Only Murders in the Building Episode 5 “will deal with the unwinding of the tangled webs over the reason behind Mabel’s weird behavior.

Another interesting thing is to note that the Only Murders in the Building Episode 5 starts with a bit of a time skip which adds to the suspense of the show. Another thing that came to light was that Will, Oliver’s son used to know Mabel back as a youth which in turn can be something that’ll shed to light Mabel’s past and what happened that made her so reclusive.

Hulu gave us a pleasant surprise when it was revealed that Sting( as a fictional version of himself)  and Tina Fey ( as Cindy Canning, The trios fav podcast host ) will make cameo appearances in the previous episode with Sting being the dead Tim’s client who fired him for stock losses and was initially suspected by our heroes to be the culprit. We can only hope that He’ll make a further appearance in the latest  Only Murders in the Building Episode 5.

When will the latest Only Murders in the Building Episode 5 be available and where can I stream it?

The Only Murders in the Building Episode 5 will be available on 14th September and will stream on Hulu. Those who have access to the platform services can watch the latest episodes along with previously aired ones.

Based on 45 critic reviews, the review aggregator website Rotten Tomatoes gave the film a perfect score of 100 percent approval. “Only Murders in the Building’s ridiculous approach to true crime obsessives is at once entertaining and enlightening, thanks in large part to its incredibly lovable central three,” the website’s reviews agree. Based on 32 critic reviews, Metacritic assigned the series a weighted average score of 76 out of 100, indicating “generally good reviews.”

Does your site only cover movie and series reviews?

No, our talented team of professionals not only writes movie reviews but anything and everything related to digital and printed entertainment from Comics and Manga to Anime and Games and everything in between. The article below being an example.

Do you cover K-drama-related news too?

Yes, we do, and you can depend on us for any future news regarding any popular K-Drama series.

K-Drama Lovers Listen Up! We have updates on Hwarang Season 2! Is it releasing or not? latest updates of 2021!