Adam Cole created a ruckus on Pat McAfee Show? Click to know everything you need to know!! 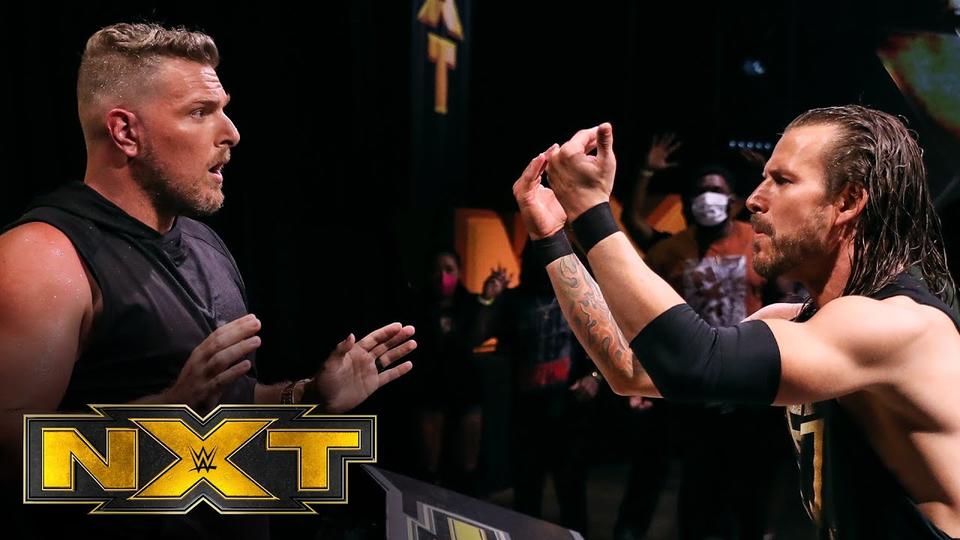 Adam Cole topped the trending chart after his appearance in the popular talk show “The  Pat McAfee Show”. According to our sources, it is been said that the “talk” between the duo didn’t go well and ended on a very offensive note.

Read to find what happened.

Pat McAfee is an American Sports Analyst who is a former Football punter turned podcaster. He runs his own show which is named as “The Pat McAfee Show”. He recently invited Adam Cole on his show. Adam Cole is an American professional wrestler who is currently signed to WWE. His original name is Austin Jenkins but he is much popular by his ring name that is “Adam Cole”. He had the longest reign as the NXT champion.

During the interview, Cole got into a heated argument with the host. Adam being aggressive in nature lashed out at him and reportedly break a microphone and a headset on the set these even passed some aggressive and offensive comments to McAfee.

The chat show started normally like any other talk show with a guest and a host. McAfee asked Cole about the comparison he is been receiving Shawn Michael as a wrestler. McAfee even said that Cole stands nowhere to what Shawn Michael was. To this, Cole replied, “First of all Shawn Michaels himself has said there are comparisons between the two of us,”.  He then said, “Which to me is a huge compliment. In my opinion, he’s the greatest of all time. I, by any means, have never said I’m as good as Shawn Michaels ever. I know I have years and years before I get to that point. I think Shawn realizes that maybe I’m on my way to having a career like his. He’ll tell you and I’ll tell you I’m not worried about becoming the second coming of Shawn Michaels, I’m going to be the first Adam Cole.”

McAfee responded, continuing his notion about Cole not being comparable to Michael. Pat said that Cole has used the undisputed era to grow himself and to become the longest-reigning NXT Champion in history while on the other hand, Shawn had his own struggles and he has earned it with every bit of his efforts. He continues saying that Michael was a self-made man and did all of it by himself. He stated that the “big g difference” between Cole and Michael was that Cole surrounded himself with talented people. According to him, it was because of Cole that the undisputed era got a chance to take off.

To all of this, Cole initially responded by showing his disappointment. He said that he took some time off from his day with family only to show up to his show and got disrespected by McAfee.
He was heard saying, “I know that you are just trying to do your job, and that’s fine—I took some time out of visiting my family to come and do your show— but you’re being a total [expletive] right now,” said Cole to McAfee

Cole referred to all the people out there as a psycho who said that he surrounded himself with super talented people in order to get successful and famous and considering it as the sole reason for his fame. To which McAfee make up to his statement reassuring that he didn’t say “the only reason” but rather “the main reason”. Cole said that McAfee humiliated and disrespected him throughout the talk show and even questioned his worth, back when he was a football player. To this allegation McAfee saying, “I was the player of the decade at my position”. He even said that although he surrounded himself with good and talented people, it was majorly about him and his ball. After all the allegations, Cole finale lost his mind on McAfee and started disgracing him.

Adam said, “You’re being a total dick right now,”. “I find it so ironic that of all people to say that I surrounded myself with really great talent and that’s the reason I succeeded, of all people you? What a punter? You being a team that literally did everything, you just happened to kick a football every now and then, and all of a sudden you feel like you’re really really important”.
He further passed some offensive words and loose comments on him and went on to destroy the property.

Towards the end of the show, McAfee talked about the incident and gave a brief about it. He confessed that this incident has disturbed him. He even asked that is this a way to get treated by a guest on his own show? He was disappointed by Cole’s behavior evidently.

That’s all for now! We will keep you posted will all the latest happenings till then dwell safely.

Share
Facebook
Twitter
Pinterest
WhatsApp
Previous article
Britney Spears conservatorship trial in LA court didn’t progressed due to security reasons. Click to know the inside story.
Next article
Queen and Philip to head to Balmoral for their traditional Summer Break. Will they still be able to make it during lockdown? Click to find out MORE!