Road Shooter Killed a Little boy California Street, 'She had to hold her little boy as he died': 6-year-old's family, California Police on the way!

Hours after police say a six-year-old boy was fatally shot in a Southern California road rage incident on Friday, his sister tearfully pleaded for the public's help as police continued to search for the shooter.
"I just want justice," said Aiden Leos' older sibling who identified herself only by her first name of Sophia. "My mom wants answers." The family also shared photos and videos with local news outlets showing their beloved son playing happily at home moments before he was killed during what investigators believe is an act of senseless violence while sitting inside one vehicle when another driver pulled up alongside them and opened fire without warning according to Los Angeles County Sheriff Jim McDonnell.

Aiden Leos, a 6-year old boy from Southern California was fatally shot in a road rage incident last night. His sister tearfully pleaded for the public's help as police continued to search for clues about who killed him and why. Aiden died at the hospital later that evening where he is being remembered as an innocent victim of adult violence with family members wondering what they will do without their precious little boy.

The kindergartener was being driven to school by his mother when the shooting happened.
Aiden, Alexis Cloonan's brother, told her "Mommy my tummy hurts." His mom checked and noticed blood on him. She saw he turned blue from them getting shot in their stomachs.

Watch on Fox 11 her sister crying:

"And that was the last time my mom saw him alive," Cloonan said.

Cloonan called Aiden "a rare toddler" and said he would call her "sissy" and come into her room to tell her she was beautiful and that he loved her.

"She had to hold her little boy as he died," she said.

A Go Fund Me page has raised more than $100,000 in donations to help Aiden's mother pay for burial costs and replace her car after she lost him when a bullet shot through the truck he was sitting in.

The six-year-old boy sat with his mom on their way home from church last Sunday morning when a stray bullet hit them both as they drove by an incident of gang gunfire nearby. 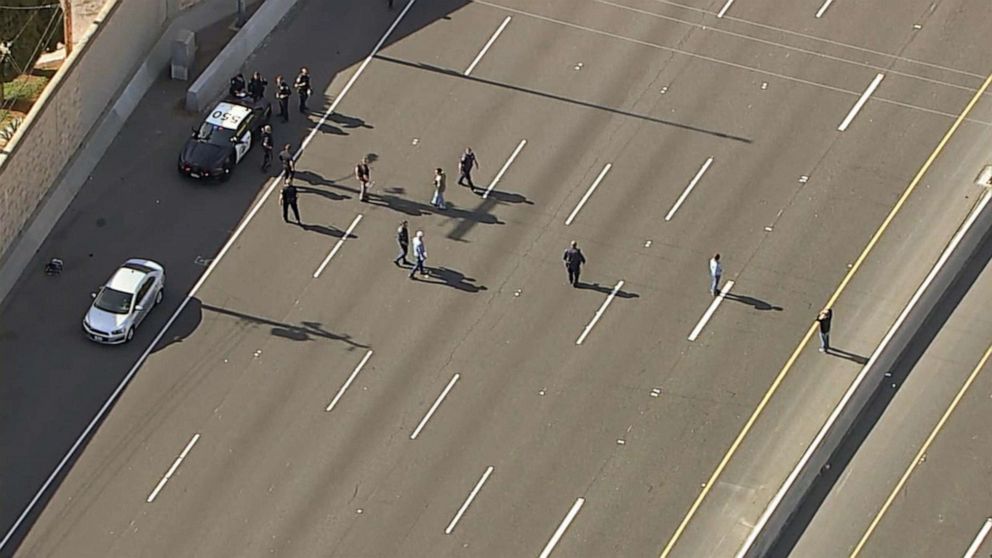 "You have no idea what you took from us today...You took her boy away," he said. "And this boy was full of love and joy and laughter."

"My nephew's dead," he added. "We're never going to be full again."

A California Highway Patrol officer described the shooting to KTLA-TV as an "isolated road rage incident between the mom and another driver."

Police are now looking for any drivers who were in the vicinity of State Route 55 between 7:55 a.m. and 8:15 a.m., when an officer was shot by another man on the northbound side of SR-55 near Orange, CA - just 30 miles southeast from Los Angeles with no freeway access as police searched for evidence following this morning's shooting incident that took place at around 9 am PST (12 pm EST).

The CHP has asked anyone who might have been driving nearby during those two time frames to please come forward with their information so they can help locate potential eyewitnesses or details about what may have occurred while officers responded to calls before closing off all traffic lanes from both directions after someone fired shots.

For more details and instant news visit The Market Activity.