Flying Witch Season 2??! Will the anime welcome another season?? Everything You Need to Know 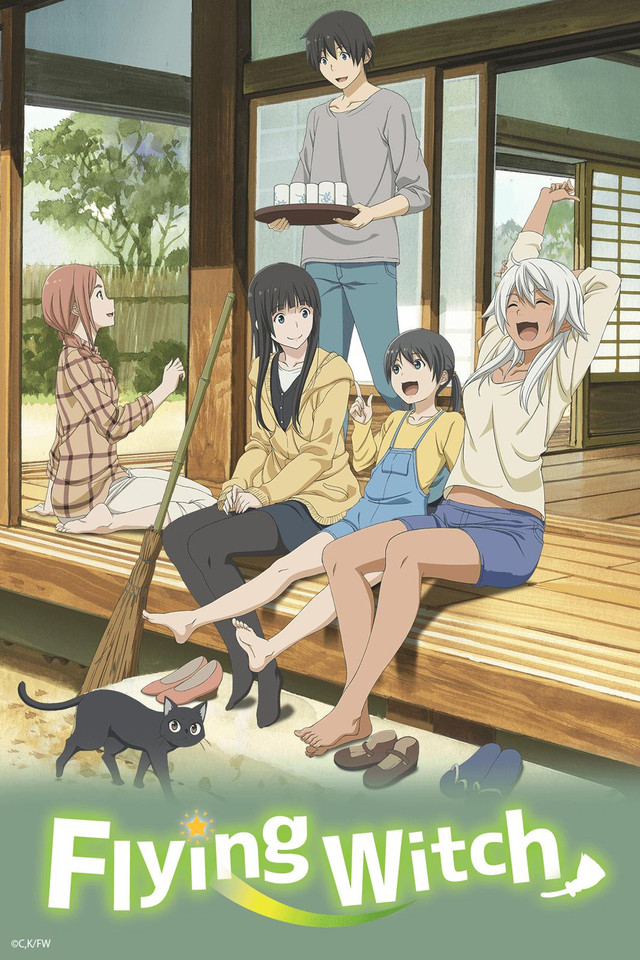 Also, if you haven’t finished season 1 or haven’t started the series at all and happened to stumble upon this article, heavy spoiler warning!!

It’s different than most animes or even books involving the presence of supernatural creatures such as demons, elves, or in this case, witches. The story revolves around a girl named Makoto Kowata, a witch from Yokohama, who moves in with her relatives in Aomori. The story, rather than a full-fledged supernatural action as most animes tend to be, is a slice-of-life with a tint of comedy mixed as a wholesome amalgam.

The story is basically about the daily life of Makoto as she struggles but strives to survive in the human world. She fails, she fights but she never gives up her polite, calm, and gentle self.

Makoto Kowata: Forgetful about directions, and as mentioned before, calm, gentle, and friendly, Makoto is new to the world wary of witches and often finds herself being the odd one out. Such as the time when she flew on a broom and Chinatsu, stared at her with shock. Or when she decides to gift Nao a Mandrake for her kindness in walking her home.

If you don’t get the reference, mandrakes, as described in folklore, scream a high pitch squeal when pulled out of the ground. But that doesn’t mean that Makoto isn’t well-written because she is and she passes well enough. She has a 17-year-old black cat named Chito, whom she can converse with easily.

Kei Kuramoto: Makoto’s cousin, and pretty familiar and good with cooking but is afraid of ghosts. He is old-school with a heavy interest in farming, cooking, and taking care of people.

Chinatsu Kuramoto: Kei’s younger sister, who is curious and often scared of things she doesn’t know much about. Initially, she was scared and avoidant of Makoto, whom she found strange and occasionally creepy but started getting close to her after they spend time together and Makoto takes her on a flight on her broom. Her interest in magic only grows from then as she gets amazed by seeing Makoto perform even the simplest of spells and slowly wanted to learn magic too.

But even after that, she is just a child and has child-like tendencies such as her extreme love for sweets and her disliking of Bakke, or bog rhubarb/giant butterbur, since it is bitter and she considers it to be for adults. All in all, she is a very lovable character and makes the series worthwhile to watch.

Flying Witch is good. That’s it. There aren’t any scenes that would hype you up or make you want to replay that scene over and over again, except a few comedic scenes but even those are for only a few times. It has been rated 7.52 on MyAnimeList and ranked #1557 among the top animes by the same website.

Personally, it is great anime for healing and a dose of positivity. There aren’t any mature scenes or graphic violence and thus, it is suited for all ages. It is just about a girl, who is a witch, and her daily life in a world she is unfamiliar with. And that is exactly what makes this anime unique. The animation isn’t the best but it is not the worst. I rate it 8/10.

But the mainstream animes in the industry set a standard that near-perfect animation, a plot full of plot twists and scenes that would give you goosebumps. That is why this anime is under-watched and underrated. While, yes, the tastes and preferences matter and they play a key role, this anime is worth a shot and if you’re into the genre Iyashikei (healing), then definitely.

The manga, to which the anime had stayed loyal throughout. Chihiro Ishizuka started the initial publishing back in August 2012. He has released nine volumes/books with the latest one released in June 2020. The anime stopped in between the fourth volume. So technically, the JC Staff, the Studios that host the anime, have a five-and-half worth of source material. So Flying Witch Season 2 might not be that far.

The possible plot for Flying Witch Season 2 can be based around the life and things that unfold next for Makoto and her friends as she and Chinatsu work upon the powers and secrets of the witch world.

Flying Witch Season 2, would remain on many watchlists and it is hooped that the producers decide to release the hints or Flying Witch Season 2 altogether. It is great for healing, as mentioned before, especially if you’re trying to heal from a traumatic incident or phase.

Stay tuned for more updates and check out other articles from our site!!

Share
Facebook
Twitter
Pinterest
WhatsApp
Previous articleSeis Manos Season 2 Release date: Is The eager wait for this Netflix Anime is Finally over!!! Latest Updates and Plot Expectation.
Next articleCan Ultramarine Magmell season 2 has a future? Discover all you need to know!