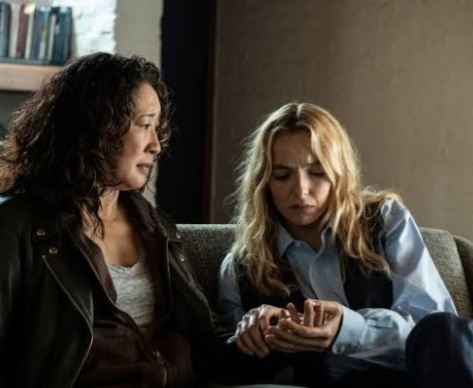 One of the best psychological thrillers and adventurousdramasa of 2018, with both the nail-biting and the mind-bending storylines, BBC original’s ‘Killing Eve’ made its place among audiences.

2022, the fourth and final series ended ‘Killing Eve’ with a disappointment to the fans.
Although the drama was based on the Villanelle novel series by Luke Jennings, every season has a different head writer. That’s the reason every season brought different types of thrilling experiences to audiences. But the 4th season didn’t fill the audience’s expectations at all.
The story of killing Eve revolves around a ruthless international assassin Villanelle who works for a secret organization, Twelve; and Eve, an MI6 officer whose task is to pursue and locate Villanelle. The beginning of the story shows us Villanelle’s extremely violent phrase as she was just killing people carelessly, showing no superficial response to the the emotional situation and no guilt at all. She became a psychopath-like person to the audience. As the story moved forward, we saw the depth of Both the protagonist’s life and they become the most beloved characters of all time.

The Fairly Oddparents: Fairly Odder, review, how to watch it online

But unfortunately, the season has not ended with happy and smiling faces. Rather it has ended with the destruction of Eve. Villanelle was dead from a gunshot as Eve watched and has end with a flash of ‘THE END’ on-screen and a scream from Eve.

This scene broke the Audience’s heart.

Why this is unfair?

According to the fans, Watching seasons 1 and 2 we got to know the depth of the protagonists, their miserable and unloved life but living with grace and fearlessly. The audience witnessed the sufferings of both the protagonists and their mental breakdowns. With time, they found people who can finally love them. Villanelle and Eve finally found each other in season 4 which was the most awaited scene fans have expected so far.

Audiences loved the character Villanelle and were empathetic towards her from the beginning because of her extremely strong and feminine attitude with a broken heart who is searching for love and family. Killing a character like her in the end when she finally moved forward and changed herself for her love Eve, broke the heart of millions.

Fans made an Outburst.

However, the whole fan section of VillanEve has Busted in anger. They have made extreme outrage at the season 4 writer Laura Neal over the tragic ending. Even according to the book Villanelle and Eve end up having each other with a happy ending for the readers. The fans wanted both the characters to find love, peace, and happiness which they deserved, in the end. They are very much disappointed with the end. The anger they showed on social media was tremendous.

A user reviewed the series as “Shoddy and cruel”. Some expressed their anger by posting a ‘shitty ending‘. Some slammed the writer and said they have failed, twitting “How does it feel to be a hostage of bad writers and producers?”

Some slammed makers saying “homophobic” because they killed the VillanEve couples. And some ironically compared it with ‘The new, game of thrones.

Here is another fan theory.

Fans newsletters to the writers saying, “ letting your main character finally get everything she wants and brutally taking it away to make her feel dead made your audience feel the same way. For some people, this wasn’t just a sho and the lack of empathy is unforgivable.”

Some Fans made up their alternative ending with the scene where Eve and Villanelle finally decided to stay together and shared a kiss. some posts are here.

THE TRAGIC END OF “KILLING EVE” LEFT THE FANS DISAPPOINTED

How cast and crew explained it

In an interview, Jodie Comer was asked about the ending of Killing Eve, and she said, “ it’s mixed emotions. I was kind of stunned the beautiful thing about shooting the ending was that we were together on set, which was amazing. I don’t know how I feel about the ending, truth be told.” Fans are suspecting that she is not happy with the ending either.

Whereas, Head writer Laura Neal explained the ending as the rebirth of Eve and move forward with the memories of Villanelle to a new life. “It felt really important to us, that moment because it signals Eve’s rebirth, and we wanted a sense of her washing off everything that had happened in the past four seasons and being able to begin again, but take everything that she has learned and everything that Villanelle has given her into a new life.” She said.

Thought The series was unpopular, it was loved by millions of people, but the ending left the millions so disappointed and unhappy.